The past century has witnessed a profound transformation in the way food is grown. The development of synthetic fertilizers in the late 1800s, the introduction of synthetic pesticides in the early 1900s along with mechanized farm tools created the era of industrialized farming. This development is somewhat confusingly called the Green Revolution, and it has spread all over the globe.

The primary advantage of this new method of agriculture was a reduction in the amount labor required to grow food. Today, about 1 in 100 people in the United States and Canada are involved in food production — the lowest percentage in the history of our civilization. It might seem like a social benefit to reduce the amount of work required. But actually we have a situation where plenty of young people would like to get into farming but can’t It’s worth considering: what have been the costs and benefits of the so-called Green Revolution? 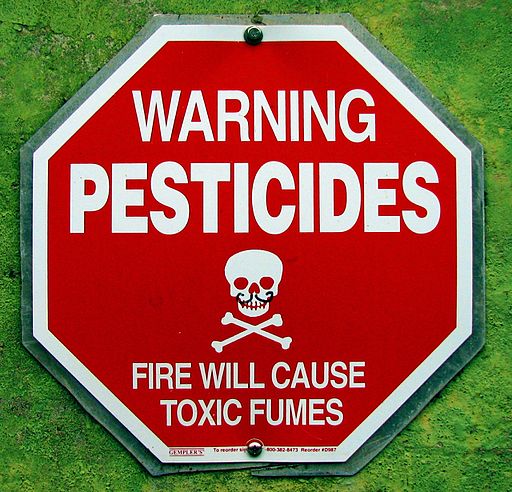 In 1962, Rachel Carson published Silent Spring, a pivotal book in the emerging environmental movement. In it, Carson described the chilling effect of the pesticides like DDT on the environment, particularly on birds. Concern over the devastating effect of this chemical, largely inspired by Carson’s work, led to a nation-wide ban of DDT in the U.S.

While DDT may be a thing of the past, the underlying attitude which justified it’s use in the first place is still prevalent. DDT and other pesticides serve one purpose and one purpose only: they kill species we have determined to be pests, whether they be invertebrates, fungi, or plants. But what is a pest, or a weed? There is no such biological or ecological category as a pest. Quite simply, a pest is a creature that humans find inconvenient. Usually for economical reasons.

The problem is that complex natural ecosystems aren’t designed to function in accordance with what humans find to be convenient or economical. And it turns out that blanketing the soil in chemicals that are purposefully designed to be poisonous has a negative impact on soil health, plant health, and human health.

While pesticides can function in a variety of different ways, they usually target a category of creatures. Fungicides kill fungi, miticides kill mites. The primary problem with this attempt to control nature is that it is never just the target species which is affected by these poisons. The real world is not a laboratory. While a farmer might dislike powdery mildew on their fruit, the fungicide which they spray over their orchard will be just as deadly to beneficial fungi in the soil, which will also suffer. This fungi plays an essential role in the soil ecosystem, and without it the health of the plants — including, inevitably, the health of the farmer’s crops — will be affected.

A weakened soil ecosystem means plants are less able to get the nutrients they need, and in brutal twist of irony they become less resilient to pests. More pesticides and fertilizers are then called for in an phenomenon referred to as the chemical treadmill. Once you’re on it, it’s hard to get off.

The chemical treadmill effect can be seen most clearly today in the field of genetically modified crops. Contrary to popular belief, the overwhelming majority of genetically modified seeds have not been developed for higher yields or more nutritious foods. Most of the GMO seeds on the market have been designed by chemical companies to be genetically resistant to their patented pesticides. It’s the same companies — Monsanto, Syngenta, Bayer, Du Pont, and Dow.

The War Against Nature

89% of corn, 94% of soybeans, and 89% of cotton grown in the United States is now genetically engineered to be resistant to the most popular herbicide on the market — glyphosate, sold by Monsanto as RoundUp. Over the past 20 years or so since the introduction of GMOs, glyphosate use in the U.S and Canada has skyrocketed. This is a health concern for us — the World Health Organization has recently deemed glyphosate to be a “probable carcinogen” — but it’s also locked us into a biological arms race with nature. This is not a battle we can win.

All throughout the United States, farmers are encountering weeds that have responded to regular dousings of glyphosate by developing their own immunity. These so-called superweeds are popping up across the continent.

This was bound to happen. Usually, when we consider a plant or a bug to be a pest it’s because they reproduce very quickly. Think, of example, of aphids. But that fast reproduction also means that, when put into an evolutionary crunch, these species will develop solutions fast. They live much faster life cycles than us. It is inevitable that they will win the evolutionary arms race. And yet chemical companies have responded by developing seeds that are resistant to 2,4-D — an even more toxic pesticide and a main ingredient of Agent Orange. Apparently when the medicine doesn’t work, you double the dose.

This fast life cycle of the target pests carries with it yet another problem. Aphids have an amazing reproductive system: aphids are mostly females, and they are born pregnant. A single female aphid can produce thousands of descendants and dozens of generations in a single season. 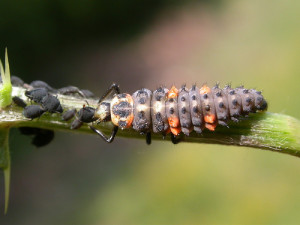 Ladybugs are a favorite garden visitor. They are considered a welcome beneficial insect. They help to pollinate flowers, they are pretty, and they have a voracious appetite for aphids. But like most predators, ladybugs have a much slower reproductive cycle than their prey. When the farmer goes out into the field to spay for aphids, both aphid and ladybug populations will collapse. But with their super efficient reproductive cycle, the aphids will recover and might even get sprayed again. The ladybug population will probably not recover for the entire season. So we have decimated the population of the insect we consider beneficial, while only slowing down the insect we consider a pest.

This is madness. Luckily, it doesn’t have to be this way. Research has show that organic methods of food production can produce yields equal to or greater than chemical agriculture. There are enough people willing to do the work of caring for the land and growing food that we don’t have to make labor reduction our primary concern.

The organic movement is growing all around the world, and with farmer’s markets and organic grocery stores popping up everywhere, it’s getting easier and easier to make environmentally conscious choices. While not everyone can currently afford to eat organic all the time, we can all avoid GMOs, and support organic agriculture when and if we can.

Visit our Ways to Help or our Resources page for more inspiration on how you can help to be part of the solution.

“Warning2Pesticides” by http://www.cgpgrey.com. Licensed under CC BY-SA 3.0 via Wikimedia Commons